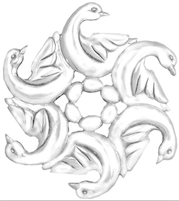 The Sixth Day of Christmas

On the Sixth Day of Christmas my true love gave to me . . .

What? six geese a-laying. What are they laying? baby chicks, raw eggs or golden eggs? It would make a difference. Right?

Tradition uses the six to remind the children of the six physical days of creation in which the crowning creations were man and woman. The six has been given a bad reputation because in the book of Revelations it says, the beast is “the number of a man; and his number is Six hundred threescore and six.” (Revelation13:18) This article will not focus on that, but on the positive, amazing aspects of the number six.

The sixth constellation is Aquarius, the Water Bearer. He represents Christ as the Good Shepherd and Master Teacher sharing His knowledge in the form of water to His students (the church) represented by a big fish. See John Pratt’s Zodiac article, http://www.johnpratt.com/items/docs/lds/meridian/2005/zodiac.html

Lehi took his family out of Jerusalem Six hundred years before Christ. In modern times, there are six steeples on the Salt Lake temple and in the 1990’s President Hinkley introduced his 6 B’s.

There are many sixes in the Hebrew culture. In the Tabernacle you’ll find six branches on the Menorah, the candlestick in the Holy Room. There are six symbolic foods in the Passover meal and six stone jars for wine at the wedding ceremony.

The sixth letter in the Hebrew alphabet is vav, anciently it was presented as a tent peg and its meaning is nail, stake, hook and connection. It represents the scriptures, bridges and links. We are the vav or link between generations and Christ is our vav between us and God.

The sixth Hebrew Holly Day is Yom Kipper, the Day of Atonement. This celebrates the coming of Christ and the fulfillment of His mission. Christ died on the 6th day of the week. Don’t forget that He was both born and resurrected on April 6th and the church was organized on April 6th.

Respect the number six! Celebration of the birth, the resurrection and the second coming of Christ are huge reasons to fall back in love with six. You will stand for the six with me?

The Fifth Day of Christmas

Everyone’s favorite is, “five gold rings!” Why are gold rings so popular? Their color? Their value? Their beauty? It is unsure the reason why they were chosen in this Christmas song, but tradition tells us the reason for the number five.

It represented the first five books in the Old Testament, the books of Moses. The Hebrews call these books the Torah. Why are they so important? Because they give us all the stories from the creation through the exodus, plus all the laws and  covenants they made and lived.

The fifth finger is the pinky, the smallest of them all. He is not the last in the line-up but takes the quarterback position. He is the worker, he takes care of the production, the check-ups and the follow throughs. He is the “doer of the word” not just the hearers and talkers only (see Sterling W. Sill’s talk called Hold up your Hands). The hand has five fingers all working together. The right hand is the covenant hand, the one that make covenants with, like accepting a callings or the sacrament. The human body can also be seen as a pentagon with outstretched, two legs, two arms and a head.

The number five as a pentagon represents life, regeneration and procreation. As a pentagram it means excellence and grace and as a spiral you see balance and cycles. And all of them elude power. God’s power is priesthood (article of faith #5). There are also many words in the scriptures that have five letters like grace and glory.

I’m reminded of the worker bee, who is small and seems insignificant but the one who produces the honey. Remember “jots and tittles?” they are the commas and apostrophes in the Hebrew language, tiny, but necessary and not forgotten by God. We use fives and stars in our language to describe and to rate things such as the five star hotels or “stardom” and the Olympics.

Five gold rings, little worker, human life, hands, grace are all little things. But the number five also has great power. Production Power, Procreation Power and Priesthood Power. Remember the little things, be grateful for them for they have great Power! Can you see that in your life?

On the fifth day of Christmas, My Father gave to me five things of power.

The Fourth Day of Christmas

On The Fourth Day of Christmas My Father gave to me . . .

“Four calling birds.” What are they calling for or singing to? Tradition tells us that this famous song was written to remember religious things and they portray it in the numbers, but I wonder about the items. Why calling? Why mostly birds? Was it only about meter? I don’t know the answers but will to learn.
​
The four represented the four gospels in the New Testament. The first hand witnesses of Christ’s mortal life.

The fourth constellation is Sagittarius, the archer. He is a centaur, half man and half horse, which represents the dual nature of Christ, being half god and half mortal. He is shown in the act of shooting the scorpion, the adversary. This is the task he was completing during his mortal life on earth.

Now the fourth finger is the ring finger, the family relationships. This finger represent the source of most of your eternal happiness, satisfaction and education for both here and the hereafter. You have heard it said you only take to the next life what you learn, but you also get to take your relationships. What are you doing to strengthen your relationships? Our family relationships are our great source of satisfaction and pleasure. God is also our family and if we feel like His work is burdensome and makes us weary and not uplifting then we should reevaluate, repent and reassess. This mortal life is for us to find joy and we can do this through our families.
​
The first commandment given to Adam and Eve was to “multiply and replenish the earth.” This is  exemplifies the essence of the number four and the Hebrew number 4, dalet. Could the four “calling birds” be four baby birds calling for their parents?

On the fourth day of Christmas My Father gave to me
four family members,
three great desires,
two directions… 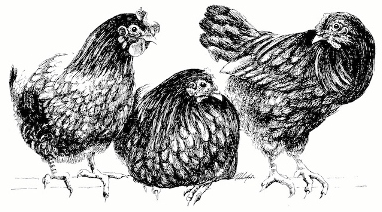 The Third Day of Christmas

​In body language the third finger on the hand is the middle finger, the tallest of them all. This represents the desires of our hearts, our personal mission. The word ‘desire’ means “of God.” Imagine sitting down with God, before you came to earth, and learning about your mission, the desires you would have. You were excited and couldn’t wait to come and fulfill those desires. Now on earth our desires are clouded with beliefs. You ought to spend a lot more time than you ordinarily do in increasing the volume and intensity of your righteous desires. Ask to see them more clearly, seek to obtain them and knock down all the walls to receive them.

The third zodiac constellation is Scorpius, the Scorpion. With the heroes foot on his head it is the representation of evil being overcome by Christ our Judge. This reminds us that we are all in the same battle against evil together. Are you fulfilling your individual mission in not heeding the temptations of the devil?
​
The third gift from God is your mission. Everyone is given an overall mission and an individual mission. Everyone has the mission to overcome Satan. Individually, you have a mission to fulfill your desires by increasing your faith and sharing your message of hope and spread the love of God everywhere and with everyone. On the third day of Christmas My Father gave to me,
​ three great desires.

The Second Day of Christmas

On The Second Day of Christmas My Father gave to me . . .
According to tradition the “two turtle doves” represents the two books of the bible, The Old and New Testaments of Christ. I imagine two identical doves looking at each other. One facing east and  the other facing west. Which in turn reminds me of the Old Testament looking forward to Christ and the New Testament looking back on His life, both pointing to Christ. The Testaments teaches us about Heavenly Father’s Plan and invites us to look to Christ for direction.​

​The pointer finger, the number two, the shape of an eye, shoes, and the scriptures all teaches us about direction and leadership. Which way are you facing? Learn a lesson from the two turtle doves and look to Christ for direction on our individual path.

On the second day of Christmas My Father gave to me two directions. 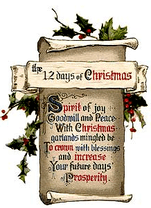 The Twelve Days of Christmas﻿

Between 1558 – 1829 it was against the law for Catholics in England to practice their faith with severe penalties. Thus the song was created as a memory aid for children to remember important doctrines of their faith by hiding true the true meanings within the silly lyrics. The children sang it openly without the authorities knowing the real meaning.
​
The “true love” of the song is not a suitor but is actually God Himself. The “me” who receives the presents represents every baptized person.(http://noelnoelnoel.com/trad/12days.html)

God giving gifts to his people. This reminded me of the symbols of numbers and wondered if the song and number symbols complimented each other. I found my next project!

My son, Matteo, will be returning from his mission on January 6th, Epiphany! In honor of him and because I love numbers I will share these findings over the next twelve days! If you like history, numbers and/or symbology you will enjoy this journey too! 🙂

The First Day of Christmas