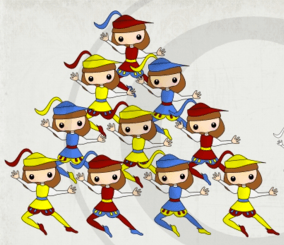 On the tenth day of Christmas

On the tenth day of Christmas my true love gave to me . . .
​“ten lords a leaping” Traditionally ten was the used to remind us of the Ten Commandments. While the missionaries taught a young lady in our home they shared with us an easy finger play of how to remember the ten commandments and their order. I recommend you ask a missionary the next time you have one over.

​The etymology of the word ‘ten’
The word “ten” is derived from the Indo-Eurpean word dekm, signifying “two hands” a reference to our ten fingers. From Sanskrit dasa, Greek deka and Latin decem.  The Germanic branch changed the “d” to a “tz” in “zehn” and from this came “ten.” In Hebrew and Arabic the word for “ten” is ‘kinsman’ or ‘tribe.’ ​‘Yod’ is the tenth letter and number in the Hebrew Alphabet. It is the smallest of all the letters, but the most powerful. Anciently it was written as an arm and a hand reprinting work and worship, wholeness and oneness, and the power to act. Yod’ is suspended in midair and has two right angles implying the covenants that we make with our right hand.
‘Yod’ is small and seemingly insignificant just as our hand are small, but do the more work than any other member of our body. Just as one drop of oil hold the whole essence of the plant from which it come. Our cells hold the whole essence of the entire body.

​The number ten is unity at another level. We are back at ONE with another value, in this case a place marker, or zero. The root of TEN is ONE. TEN has all the values of ONE, unity, oneness, heaven, father, cycles, etc. Ten is ONE powered by TEN. ​TEN represents the Power to Act. Multiplying by ten doesn’t change the number but only act to expand its power! 50 is an expression of 5. It is expanded power.