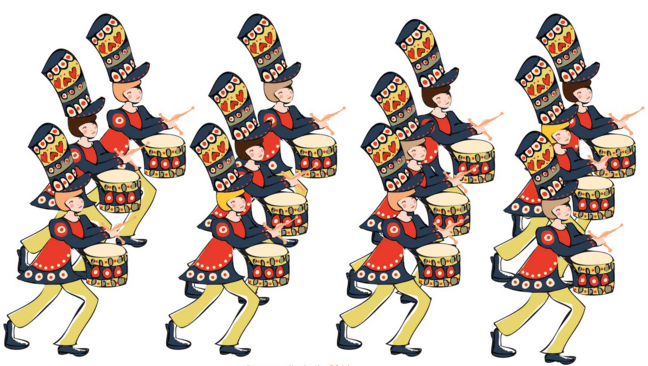 On the Twelfth Day of Christmas

​On the twelve day of Christmas my true love gave to me . . .
“twelve drummers drumming.” They were keeping the rhythm so the saints could march in beat while walking on the path back to God. The number twelve was to help the children remember the twelve apostles.

The twelfth article of faith is about government. “We believe in being subject to kings, presidents, rulers, and magistrates, in obeying, honoring, and sustaining the law.”

Twelve can be found in 187 places in God’s word. The meaning of 12, which is considered a perfect number, is that it symbolizes God’s power and authority, as well as serving as a perfect governmental foundation. It can also symbolize completeness or wholeness. For example, Jacob (Israel) had twelve sons, each of which represented a tribe begun by one of his sons or a princes.

The twelfth and final zodiac constellation is Leo, the Lion, the King of Kings. He is crushing the head of the serpent. Christ is referred to as the “Lion of the tribe of Judah” (Rev 5:5) Leo is the symbol of Christ conquering Satan and then reigning as King of Kings.

​‘Lamed’ is the twelfth letter in the Hebrew Alphabet and the tallest. It is known as the majestic letter, the King of all other letters.  Anciently it was written as a shepherd’s staff. Symbolically it represents Christ as the leader of the flock.

Twelve in His Story:

The eagle has twelve tail feathers. These are the most powerful of all its feathers. These are the white feathers with the black tips, the steering, landing feathers. The native americans illustrated these feathers as lightning. Lightning produces chemical changes by uniting nitrogen and oxygen, thereby bringing nitrates to the soil of the earth with the rain. This helped the plants to grow. This symbolized the white surge of enlightenment that expands the mind. Can you see why they did rain dances?They believed that “rain is the liquid spirit – or essence or soul – of clouds.” (see my next series on eagles for more)

The traditional sweat lodge and tepee structures are still ritually constructed to look like the zodiac pattern of a calendar resting on twelve poles. Each section had an object or symbol representing a month and a constellation.

Twelve is double six and called the dodekad or “two ten” in Greek. The wonder of twelve is that it has so many divisors (one, two, three, four, and six), making it the supreme number. This is one of the reasons why our founding fathers chose it to be our system of measure. Other reasons was to remember its symbolic connection to God and Christ.
Three of these divisors shape (triangle, square, hexagon) tesselate, covers a flat surface without leaving gaps.

How do you choose what to write about with the number twelve, it is so rich!
The theme of twelve is power (tail feathers), order (months), government  On the twelfth day of Christmas My Father gave to me
twelve
eleven faithful disciples,
ten commandments,
nine spiritual gifts,
eight new levels,
seven complete cycles,
​six celebrations,
five things of power,
four family members,
three great desires,
​two directions …